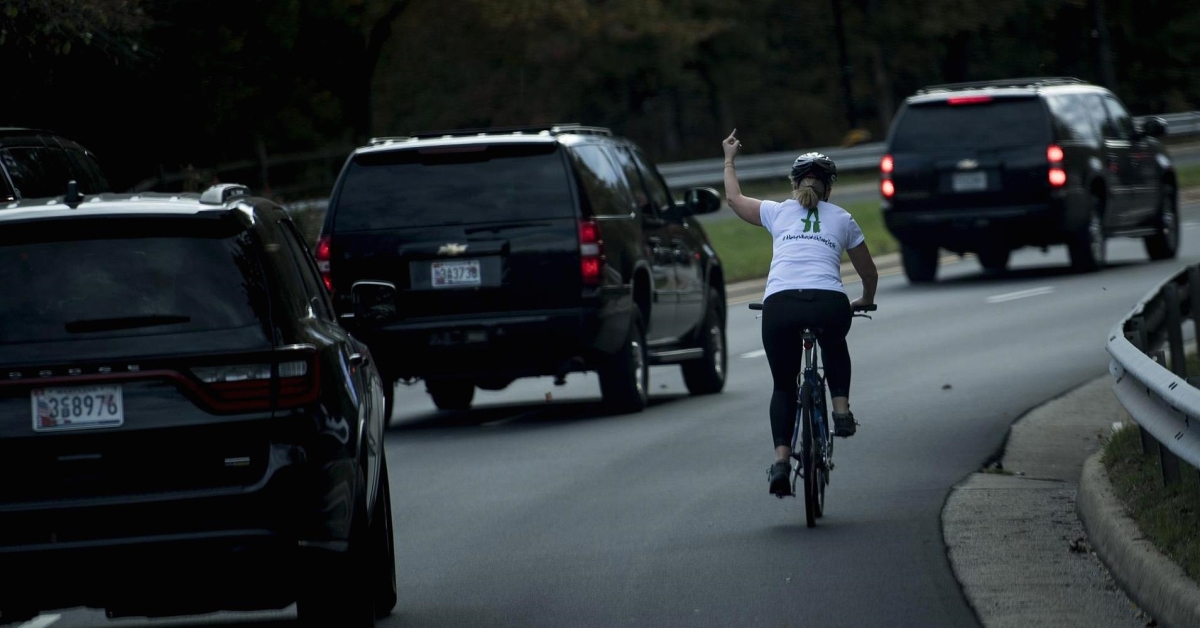 A 50-year-old American identified as Juli Briskman has been fired by her employer for giving President Donald Trump the middle finger.

The picture which was taken by a White House photographer travelling with the president as he left his golf course in Sterling, Va., has gone viral almost immediately after it was taken.

Donald Trump’s motorcade was driving down a wooded road sometime last week as Briskman who was riding a bicycle gave him the middle finger.

The picture which was picked up at White House pool report, was televised and discussed on a Late-night talk show as the hosts, joked about the encounter and people on social media began hailing the unidentified woman as a “she-ro,” using the hashtag #Her2020.

Shocked to see her picture circulating online, Briskman decided to discuss with her company’s HR department what was happening when she got to work on Monday.

By Tuesday, her bosses called her into a meeting and said she had violated the company’s social media policy by using the photo as her profile picture on Twitter and Facebook.

After showing their displeasure with the act, Briskman’s bosses at Akima, government contractor Akima LLC,  eventually sacked her over her action.

In a Saturday interview with Huffington Post, Briskman, a mother of two, said she was stunned that someone had taken a picture of her giving president Trump the middle finger.

“They said, ‘We’re separating from you,‘” said Briskman. “Basically, you cannot have ‘lewd’ or ‘obscene’ things on your social media. So they were calling flipping him off ‘obscene.’”

Briskman had worked with Akima for over six months in the marketing and communications department.

In defence of herself during her meeting with the company’s executives, she emphasized that she wasn’t on the job when the incident happened and that her social media pages didn’t mention her employer. But rather, she was told that because Akima was a government contractor, the photo could negatively affect their business.

Virginia being an employment-at-will state, means that employers can fire people anytime and for any reason.

But Briskman said what infuriated her most is that a male colleague kept his job after recently posting lewd comments on his Facebook page that featured Akima LLC as his cover photo.

She added that this colleague was only reprimanded for calling someone “a bleeping Libtard asshole” on Facebook, but was allowed to delete the post and keep his job.

“How is that any less ‘obscene’ than me flipping off the president?” she asked. “How is that fair?”

When asked what she was thinking when she saw Trump’s motorcade roll up next to her, Briskman said it was a gut reaction to flip him off.

“He was passing by and my blood just started to boil,” she said. “I’m thinking, DACA recipients are getting kicked out. He pulled ads for open enrollment in Obamacare. Only one-third of Puerto Rico has power. I’m thinking, he’s on the damn golf course again.”

“I flipped off the motorcade a number of times,” she added.

Briskman, a Democrat, getting over her employer’s unsupportive response to her act said she plans to look for a new job with an advocacy group that she believes in, like Planned Parenthood or PETA.

She also added that she had no regrets about the attention her public show of displeasure with Trump received. In fact, she said she’s happy to be an image of protest that resonates with many Americans.

Veteran Nollywood actor, Sadiq Daba set to be flown to UK for treatment

Father of eight allegedly killed by enforcement agents in Calabar