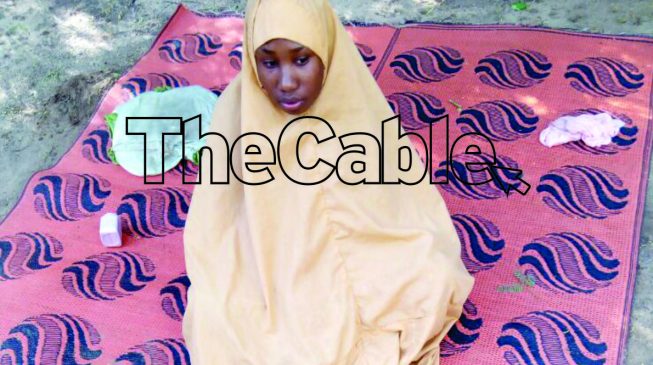 The Parents of Leah Sharibu, the only girl still held captive by Boko Haram insurgents amongst other school girls abducted at Government Girls Science and Technical College Dapchi have confirmed the voice from an audio message from an Online publication, The Cable as that of Leah, their daughter.

The Nation reports that Leah Sheribu’s audio message was published by The Cable online news platform with her recent picture wearing a brown hijab dress.

In the message, Leah made an appeal for her release from Boko Haram captivity.

The audio is translated thus:
I am Leah Sharibu, the girl that was abducted in GGSS Dapchi. I am calling on the government and people of goodwill to intervene to get me out of my current situation.

“I also plead to the members of the public to help my mother, my father, my younger brother and relatives.

Kindly help me out of my predicament. I am begging you to treat me with compassion, I am calling on the government, particularly, the president to pity me and get me out of this serious situation. Thank you.”

Our reporter called Leah’s parents to confirm the veracity of the voice and both were in agreement that it is their daughter, Leah’s voice.

Both Mr. Nathan Sheribu and his wife Rebecca told our correspondent on phone that their hope has been re-iginited by the recent development having heard their daughters voice and seeing her recent picture.

“I can confirm to you that the voice that spoke is that of my daughter Leah. It is her voice no doubt. I am happy that I can hear my daughter speak. This has giving me hope that she is alive. I am also happy to see her recent picture displayed.

“My request is the same with my daughter. The government should play their part now by intensifying efforts to secure her freedom” Nathan said.

For the mother, her hope never died, though it has now doubled. She will however become happier the day her daughter is free.

Like her husband, Mrs Sheribu also called on President Muhammadu Buhari to without delay swing into action to free her daughter.

She also called on her daughter’s captors to unconditionally release her daughter to her so as to save her from the trauma she is going through.

The Nation reports that Leah along with her school mates were abducted in February from their school. Her mates were however released after one month but Leah was held back by the insurgents for the reason that she refused to renounce Christianity, her faith.

More than a month ago, the Excutive Director of Complete Care Foundation, Barr. Aisha Wakil popular known as Mama Boko Haram told reporters in Maiduguri that Leah was still alive hold on to her Christian faith.

“I am really worried about Leah Sharibu and her freedom from Boko Haram is very important to me. Leah did not renounced her faith in Christianity, that I can assure you and we shall do everything with both the government and the international organisation to ensure she regain her freedom just like her colleagues that were reunited with her families,” Mama Boko Haram said.

Today’s development has gone to vindicate her statement of the proof of life of the innocent girl still held by the insurgents in the last seven months.

Author IMighty 0 49
“I’m the pride of a mechanic, The Jewel of a zobo seller”- Fresh Graduate Celebrate Parents   A lady Identified as Linda Okojie has...
Read More