Portugal and Real Madrid ace footballer,Cristiano Ronaldo Dos Santos Aveiro has won the UEFA Men’s Player of the Year for a second time in a roll. Ronaldo Crowned UEFA Player Of The Year Again!

Some past winners of the award include Lionel Messi and Barceona team-mate Andres Iniesta, who won the prize in the 2011-12 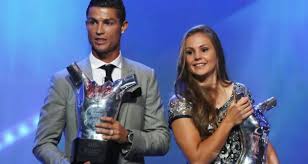 In a celebration mood,Ronaldo said,

“There are the same goals every year, to meet the same challenges, win everything if possible, qualify for the World Cup with my national team,”

“This trophy will give me the motivation to keep working hard, never to give up. I am blessed and delighted to be with Real Madrid.”

He wrote on his Instagram : “Thank you to my teammates, coaches and staff who helped me win this trophy again. I dedicate this to my family, friends and fans. This is also yours!”

My question is:who can stop Ronaldo?

For Breaking news be the first to know

Good news: 30% reduction on the price of cooking gas