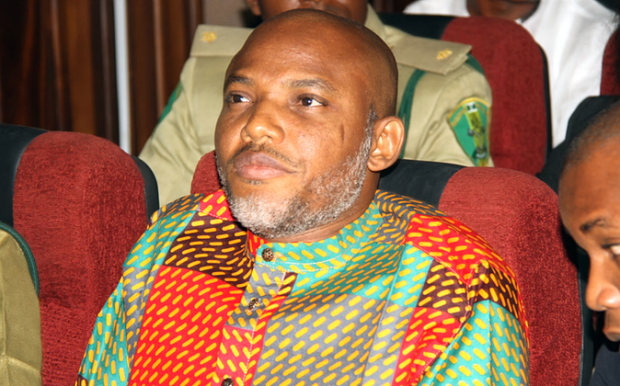 Radio Biafra on Sunday has announced the shocking sack of the former leader of the Independent People of Biafra (IPOB) Nnamdi Kanu over six charges leveled against him.

Radio Biafra, the controversial mouthpiece of the Indigenous People of Biafra (IPOB) returned to the airwaves with a 6.am to 7.am broadcast which announced the unexpected sack of Nnamdi Kanu.

According to The Will’s report, it was announced by a top national security officer that;

“All had been quiet on the IPOB front recently. The organization has been receding from the public consciousness as many Igbo people began to openly talk against the separation and disunity agenda of IPOB. The Federal Government has been reaching out to the South-East and their State Governors have taken a hard stand against IPOB accusing the organization of pursuing anti-Igbo interests; now comes this totally new and unexpected development”.

It was further noted that the radio programme started with an announcement by a female presenter who introduced herself as Ifeoma Okorafor, with an introductory announcement that the radio was back on air and IPOB was restructuring. She then announced that “Mazi Nnamdi Nwanekaenyi Kanu, the former Director of Radio Biafra is hereby dismissed and removed as Director of Radio Biafra following extensive and intensive consultations”. She named “Mazi Ezenwachukwu Sampson Okwudili as Kanu’s replacement.”

The former director of Radio Biafra and leader of the IPOB movement, Nnamdi Kanu was also sacked on six charges bordering on;

(A) Personalization of the Biafran struggle and derailing from the core objectives of IPOB as a grassroots movement.

(B) Kanu’s decisions to incite members of IPOB towards violence leading to the death of many innocent young people in Onitsha, Aba and Umuahia

(C) Kanu privately collected £14m and another $22m to purchase landed properties abroad in his name and that of his father Igwe Israel Kanu.

(D) Kanu turned our collective struggle into a money-making enterprise for himself and his father.

(E) Upon his release from detention in April 2017, one expected Kanu to drum up support for the release of his colleagues and co-detainees such as Chidiebere Onwudiwe, Benjamin Madubugwu and David Nwawuisi. But never appealed for their release.

(F) Kanu threw away the original meaning of our collective struggle for personal gain and vain glorification. Instead, he has been going about collecting chieftaincy titles and having a messianic swagger that even allowed full-blooded Igbomen to kneel down and kiss his feet.

Quoting in part, the organization also noted that Kanu ended his moral authority when he ordered the people of Anambra to boycott the forthcoming gubernatorial elections in the state.

“See it this way; Kanu had issued an order that the people of Anambra state should boycott the gubernatorial elections and people told him he was talking nonsense. That was the end of his moral authority. Now we have to return to the drawing board to learn about those behind this latest development. It’s frustrating.”

U.S vows to partner with Nigeria to end terrorist attacks