The Attention of Nigerians in the country and in the diaspora seems to have been drawn to the ongoing unrest in the southeast and the most recent war of words between Special Adviser, Media and Publicity Mallam Garba Sheu and the Convener of the Bring Back our Girls campaign, Dr. Oby Ezekwesili over issues bordering on Biafra and Nnamdi Kanu.

The following are the reactions of Nigerians following the ongoing unrest in the southeastern zone of the country. #IPOB

If you are Igbo in Jos, Abia, Rivers, & Aba don’t attack anyone.

IPOB, a group calling for Nigeria’s disintegration’s leader, Nnamdi Kanu is a Brit who claims to be a Jew. His wife & child stay in the UK. pic.twitter.com/VTZ5EIcwUv

Just before you criticise the ARMY, watch this……

Just saw a video of the army gathering IPOB supporters and telling them to keep slapping themselves. Nnamdi Kanu isn’t there. Be wise

IPOB is a terrorist movement under the cover of Biafra. No sane Igbo will attack innocent Nigerians in SE, burn mosque, kill policemen.

If you understand Igbo, then you will know this IPOB issue has reached a point where something decisive has to be done asap pic.twitter.com/4uUP1fCFGc

Do you condemn d killings of d Nigerian Army recently or refer to d Nig Army as Stupid for d killings or you only fault the IPOB members .

IPOB members all over Nigeria that wants to go nd Join the foolishness in ABIA, contact me nd I could arrange ur transport at a cheap price

let everybody voice against the human right abuse being carried out in the SE. IPOB members should walk within the law.

Some group of fools (IPOB) saw peace and went ahead to disrupt it. They are clamoring for what can’t be feasible. #NigeriaMustUnite https://t.co/CySWee1Wha

Asking the governor to talk to IPOB will be elevating the status of IPOB. The governor should rather work with the security agencies.

I am from IMO State
I am proudly Igbo
I am a Nigerian
I DO NOT support NnamdiKalu#Biafra#Ipob .
Unity is the way..

IPOB and Nnamdi Kanu just taking over my TL. Kanu is chilling while the ignorant ones among the IPOB are risking their lives for nothing

IPOB and some Igbos want to seperate frm Nigeria, but they want to force Rivers ppl to be Igbos by force. Why do we think this way?

that’s bad but can you justify the IPOB’s barbaric acts against the Innocent non Igbo community?

Dr. Ezekwesili do you want FGN watch vandals overrun a nation? They have dealt with zaky and B.H, what’s makes IPOB special?

Anybody who disagrees with IPOB and Nnamdi Kanu’s style is immediately labelled anti-igbo and other unprintable names.

Believe me …This is not just about Nnamdi Kanu or IPOB today in Umuahia/Aba everybody IPOB or not is being intimidated by the NA.

Whatever is happening now has nothing to do with Igbo’s collectively, a man’s decision is a reflection of his individuality. — IPOB

I am From EBONYI state.
NIGERIAN
I Live in ACCRA..
I do not know what is IPOB
Nor BIAFRA.
The only thing I know is
I NEED MONEY.

The whole IPOB something is just a ploy to destabilise the government and our Northern brothers are falling for it.

Nnamdi Kanu’s wife & child are based abroad. He’s a British citizen. When it gets too hot, he’ll flee. Be wise! Don’t fall for IPOB’s tricks

Talk To IPOB & Stop This Madness Instead They Keep Quiet. Gov Ikpeasu May Be The Loser When State Of Emergency Is Declared In Abia

I am a full fledged igbo youth and a proud one. But count me out of the #IPOB madness. Nnamdi Kanu doesn’t speak for me. #oneNigeria

That doesn’t mean most of their complaints are not valid. But the secession thing & the manner at which IPOB is going about it is not valid.

Good morning y’all…. Biafra/IPOB AND @HQNigerianArmy should get their good morning elsewhere…. ?

Must we take sides ?

Can’t we condemn the actions of both IPOB & the Nigerian Army ?

This ? from the wall of @cyberagbero, is worth pondering about.

Photos of Nnamdi Kanu’s family in the UK 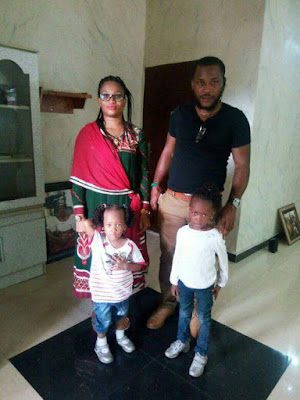 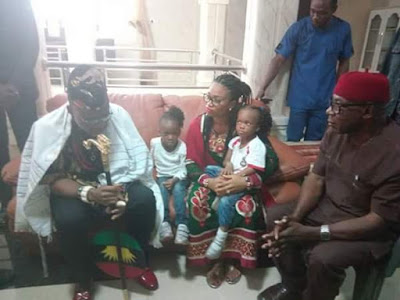 Man Was Unable To Have Erection After Being Scratch By Cat.....pet owners,beware!

How Coutinho’s wife made him join Barcelona