Femi Adebayo is a Nigerian lawyer, actor, director, producer, filmmaker, and also politician (former Special Adviser to the Former Governor of Kwara State in southwest Nigeria on Arts, Culture, and Tourism). Born to a family of entertainers, Femi understood the entertainment industry quite early. He is particularly influential in the Yoruba sector of Nollywood.

Popularly referred to as Jelili Oniso for his lead role in the Yoruba comedy movie Jelili, the award-winning actor is a fan favorite, and also possesses a versatile and relatable talent.

Olufemi Lawal Adebayo was born into the Yoruba family of Alhaji Adebayo Salami (Father) and Alhaja Ejide Salami (Mother) on December 31, 1972 in Lagos, Nigeria. He is a native of Ilorin, Kwara but grew up in Ebute Metta, Lagos.

For his primary and secondary school education, He attended Jender Age and Oke-Ode Grammar School respectively. Thereafter, Femi bagged an LL.B at the University of Ilorin and a Master’s degree in Law from the University of Ibadan.

Currently, the award-winning actor is pursuing his doctorate in law at the University of Ilorin in Kwara State as he also continues his acting career.

Read Also: Amazing Things You Didn’t Know About Odunlade Adekola And His Family

Before becoming a full-time actor, Femi practiced as a lawyer after he graduates from law school for two years, He was in the legal profession but eventually succumbed to his passion and background influence in the entertainment industry. This move has seen him witness immersive growth, bagging numerous awards and becoming an A-list actor.

His pioneer experience in the world of acting was shaped by his father, Adebayo Salami, popularly known as Oga Bello. Femi had his debut film role in his father’s first movie production titled: Ogun Ajaye.

Apart from being an actor, a politician, an entrepreneur, and a lawyer, Femi Adebayo is also a father and husband.

As an actor, he has featured in several Nollywood movies. In 2018 Etiko Onigedu, a Yoruba movie he produced won the best Indigenous Movie Award at the Africa Magic Viewers Choice Awards (AMVCA). He also owns a school for actors named J-15 Media Network School of Performing Arts located in Ibadan, Nigeria, which he established in 2008.

Femi Adebayo comes from a large family, he is reported to have 17 siblings in total. Femi is the most famous of all his siblings, however, Tope Adebayo is also well known in the Yoruba Nollywood Sector. 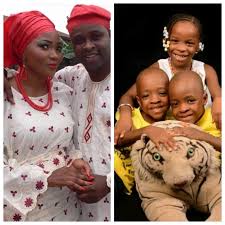 How He lost his First Marriage

Femi Adebayo met Khadijat (his first wife) when she was an undergraduate student of Computer Science in 1998 and he was studying Law at the time he met her. Six years after, in 2004, they got married and the union was blessed with three children together. Fadlulrahman Adebayo, Olaoutun Adebayo, and Firdaus Adebayo.

However, the marriage didn’t last because four years along, in 2008, they both parted ways. it is alleged that the couple got divorced because Khadijat could no longer handle his romantic roles in movies. They divorced on the ground of “Irreconcilable Differences”. 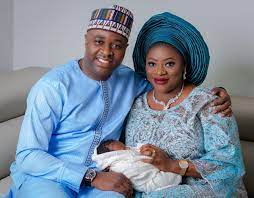 On the 9th of October, 2016, Femi Adebayo re-married. He tied the Knot with Omatayo Maimunat Sanusi who was reportedly based in the United States. Before becoming Femi Adebayo’s wife, Omotayo was an air hostess but she currently runs a restaurant and cafe shop ‘Iyan Aladuke’ in Yaba, Lagos State.

The couple is very happy with their union and there is no trouble in their marriage because they both understand each other.

On the 21st December 2018, Femi Adebayo and his new wife Omotayo Sanusi welcomed a baby boy ( Fadhil Aridunnu Olatunde Adebayo) in Houston, Texas. The couple share just one child between them for now, however, the birth of Fadhil made Femi a father of four.

5 Footballers who were ruined by their wives and girlfriends

Actress Adunni Ade celebrates her first son as he clocks 10