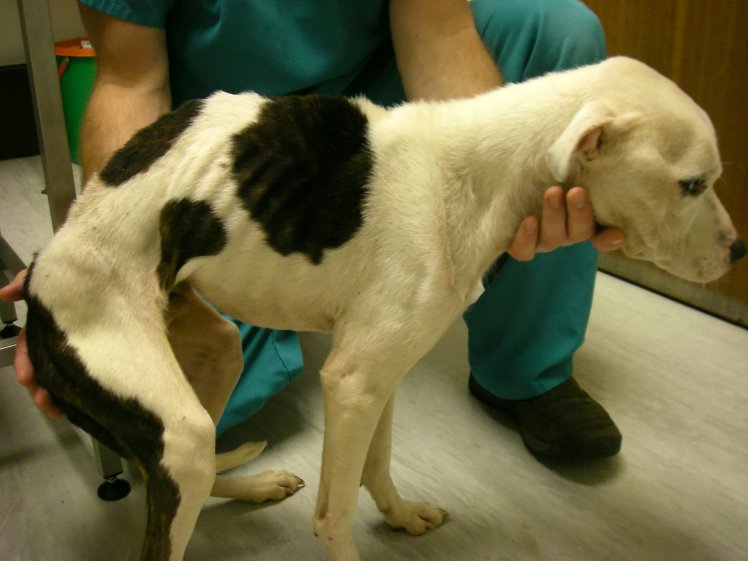 Bruno was so weak, he had to be put to sleep (Picture: SWNS)
Family banned from having pets for a decade after starving their dogs to death

A family have been banned from having pets for more than a decade after they starved their dog to death.

Heart-rending images show the result of the abuse which saw one of the family’s two dogs left with all 13 pairs of ribs sticking out.  Family banned from having pets for a decade after starving their dogs to death

Michelle Baldwin, 40, and her two sons Shaun, 21, and Shane, 19, were disqualified from keeping animals for 10 years following the abuse.

Roxy has since been rehomed (Picture: SWNS)

North Cheshire Magistrates’ Court were shown the devastating images of the two Staffordshire terrier-type breeds called Bruno and Roxy who had been underfed.

The RSPCA also described their living conditions as ‘atrocious’

Sadly, despite the best efforts of vets, black and white-coloured Bruno was put to sleep on health grounds and Roxy has since been rehomed.

The court heard that the dogs were discovered by the police on November 17 last year when they were carrying out a search at their home on an unrelated offence.

They contacted the RSPCA which led to inspector Lisa Lupson attending the property.

Inspector Lupson said: ‘Both dogs were very thin – particularly Bruno. He was so weak that as soon as I got him to a vet he was put on a drip.

‘He was very lethargic and subdued, and wasn’t responding to us at all.

‘As well as being underfed, the dogs were living in horrific conditions.

‘Upstairs of the house was atrocious, there was rubbish absolutely everywhere and dog poo all over the floor. It was in no way the best environment for dogs to live in.

The family from Runcorn, Cheshire, pleaded guilty to two charges of causing unnecessary suffering to the dogs and one of failing to provide a suitable environment.

Michelle was also given an eight-week prison sentence suspended for six months after appearing at court on Thursday.  Family banned from having pets for a decade after starving their dogs to death

Shaun and Shane were both given a 12-month community order and told to carry out 200 hours of unpaid work.

All three were ordered to pay costs of £100 each

Love On Duty:Beautiful Pre-wedding Photos Of A Doctor And His Nurse Fiancee

Tragic: Family killed by Badoo cult Group to be Buried on Friday

Wife Kills Stepdaughter With ‘Otapiapia’…her reason will shock you

7 Things You Must Take Note before Employing a Maid