Security operatives from the Lagos State Police Command deployed to the riverine area of the Ishawo Community in Ikorodu area of the State on Wednesday commenced total demolition of illegal waterfront shanties within the creeks where criminal elements hibernate to perpetrate their nefarious activities.

The State’s Commissioner of Police, Mr. Fatai Owoseni who briefed journalists in Ishawo on the ongoing operations in the creeks by a combined team of the State Marine Police, the Special Anti-Robbery Squad (SARS), mobile policemen and the men from the anti-kidnapping squad in coordination with the local vigilante group, said 13 suspected kidnappers have already been arrested and are currently aiding the team in tracking down the remaining suspects still on the run. 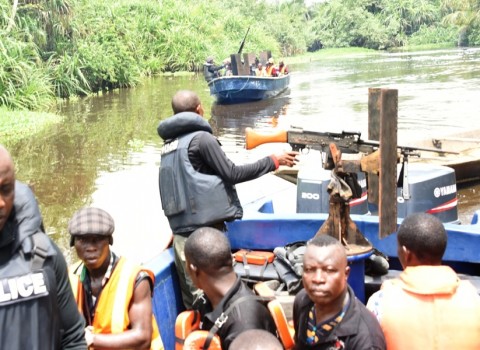 Recalled that two weeks ago, four Police Officers and one Army Captain lost their lives after an ambush unleashed on them by suspected militants in Ishawo area.

Governor Akinwunmi Ambode, while condoling with the families and loved ones of the departed officers, had assured that every perpetrator directly or remotely linked to the dastardly act would be brought to justice in the shortest possible time.

Owoseni said that the Governor immediately ordered a joint operation to hunt down the perpetrators, adding that the operation was yielding positive results.

“So far so good following the attack that occurred at Ishawo where we lost four of our policemen and army captain, we have deployed operatives in the water. What you have seen now is for us to appraise what we have been doing for the past one week. So, quality arrests have been made and we are talking to them because the arrests that were made we believe that we get some evidential value from them, so they are talking to us, at least that makes us to know who we are looking for so that we won’t be just wild catching,” Owoseni said.

The Commissioner of Police who was joined on the inspection of the joint operation to the den of the militants in Ishawo Creeks by the Commander, Rapid Response Squad (RRS), Mr. Tunji Disu, Chief Press Secretary to the Governor, Mr. Habib Aruna, security squad leaders and some journalists, said the visit was to appraise the work done so far and the next line of action.

“Earlier this morning, they were able to get to the proper camps of these criminal elements where they saw some of them cooking food who fled immediately they saw the combined team. We just feel that we should take a decision to destroy the camps. The destruction of the camps are ongoing, that is why we are here and the officers that are handling the destruction of the camps, they are right inside the creeks now and at the end of the day, they would share the story as they finish that operations, but our movement here is just for you to see the terrain and see what the security operatives are facing with regards to policing this environment and that is why we are clamouring for the destruction of these shanties”, Owoseni said.

Owoseni said that one of the suspected militants died during a fierce encounter with the Intelligence Response team of the Inspector General of Police, assuring residents in the area that they would go all out to ensure that they fish out all criminal elements in the State.
“We still want to assure members of the public that these people have murdered sleep and they will not sleep, we will make sure that all of them are rooted out and that they face the full wrath of the law.

“The 13 suspects we have, we are interrogating them and they are making useful statements for us and we are making progress and you can see that helicopter surveillance is also supporting all that we are doing but we want to assure members of the public around this axis that the government is ready, the security agents are ready to ensure that we put an end to the madness of these criminal elements,” the Commissioner of Police said.

He said the Police have gathered necessary information on the perpetrators still on the run, assuring that one by one, they would be arrested and be made to face the full wrath of the law.

He commended the synergy of the combined efforts of the security operatives, just as he added that the efforts of the local vigilante groups who are familiar with the terrain were critical to the operation especially in aiding to navigate the hideouts of the militants.

“I want to use this opportunity to thank the civilian men that have decided to join us and take us to navigate the water and also give us a lead to the centre of activities which is the creek where these criminal elements have been hibernating,” Owoseni said.