The number one citizen in Nigeria, President Muhammadu Buhari has sent his condolences to the family of the late former Vice President, Dr Alex Ifeanyichukwu Ekwueme (GCON) and also to the Government and people of Anambra State, on the passing away of the elder statesman. 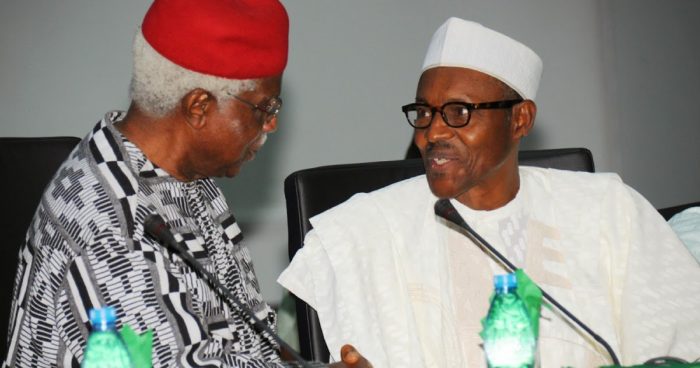 This was made known in a statement signed by his special adviser on media and publicity, Femi Adesina, He wrote:
“President Buhari commiserates with the entire Oko Kingdom, the Aguata Council of Traditional Rulers, and the Ekwueme family, over the loss of the family’s patriarch, whose regular counsels on national issues and mediations for peaceful co-existence would be sorely missed.
“The President affirms that Dr Ekwueme’s unwavering commitment to the unity of Nigeria had been a major encouragement to many governments, recalling the personal sacrifices he made in helping to lay the foundation for sustainable democracy in Nigeria.
“President Buhari believes Dr Ekwueme worked assiduously to improve the livelihood of many poor and underprivileged people through the Alex Ekwueme Foundation, describing him as a man who served his country and humanity.
“The President prays that the almighty God will receive the soul of the former Vice President, and grant his family the fortitude to bear the loss”, the statement concluded.
The former  Vice President, Dr Alex Ifeanyichukwu Ekwueme (GCON), died on Sunday, November 19th 2017 after a brief sickness.
Also read: Lady marries her former lecturer in Ibadan
Follow us on Facebook – Dailyfamily.ng, Twitter – @DailyfamilyNG, Whatsapp +2348188889427, BBM PIN D86722A7 and Instagram @dailyfamilyng for more updates.

“I regret all my actions. As you can see I am reading my Bible” – Evans

See Shocking Reason This Professor Took His Own Life (Photo)