Amazing! Boy Who Stops Breathing Every Time He Falls Asleep

Liam Derbyshire was born with a very rare congenital disease that causes him to stop breathing every time he falls asleep. Doctors told his parents that he wouldn’t live past six weeks, but the boy has defied the odds and will soon turn 18-years-old.Amazing! Boy Who Stops Breathing Every Time He Falls Asleep

Liam suffers from a condition known as central hypoventilation, or “Ondine’s Curse”, after a nymph from French folk stories. Ondine fell in love with a man called Palemon, and at their wedding, he vowed to love her with his every breath. So when the nymph later discovered his infidelity, she cursed him: “You pledged faithfulness to me with your every waking breath and I accepted that pledge. So be it. 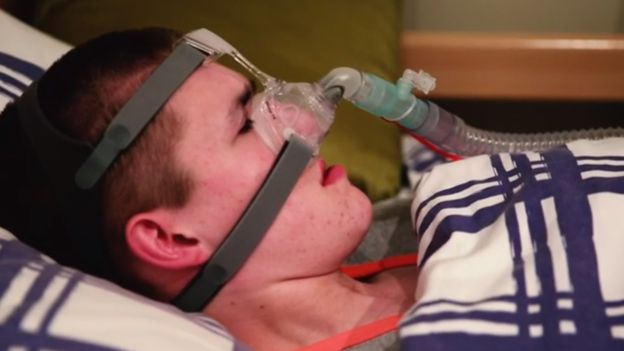 For as long as you are awake, you shall breathe. But should you ever fall into sleep, that breath will desert you.” Totally normal stuff for a folk tale, but a similar curse actually exists in real life.

Ondine’s Curse is a very rare condition. It is estimated that only 1,500 people around the world suffer from it, but Liam’s case is one of the most extreme. Milder versions of the condition prevent sufferers from getting a good, repairing sleep, but in the 18-year-old’s case, falling asleep can literally kill him. Amazing! Boy Who Stops Breathing Every Time He Falls Asleep

Because he stops breathing whenever he doses off, the boy has been sleeping in a medical bed his entire life, connected to a life support system that feeds oxygen into his lungs and monitors his vitals.

Liam Derbyshire’s room is a mix between a normal teenager’s room and a hospital, with complex LEGO creations – his favorite hobby – blending with medical gear and wires. Even though the sensors in his bed constantly monitor his life signs, someone has to be around all the time, in case anything goes wrong. Looking after him has been tough on the family, who have spent thousands of pounds on electricity bills and backup power sources, in.Amazing! Boy Who Stops Breathing Every Time He Falls Asleep 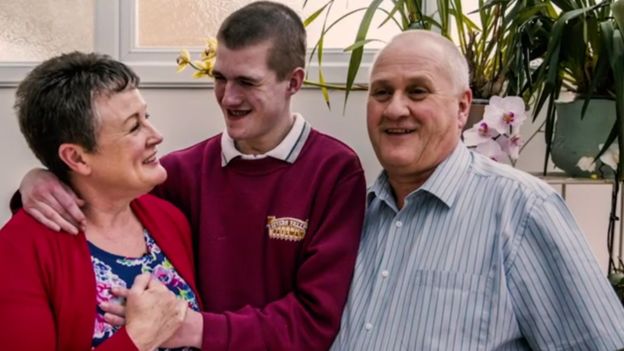 Looking after him has been tough on the family, who have spent thousands of pounds on electricity bills and backup power sources, in case of power outs, but are happy to have given their son as normal a life as he could have in these circumstances. Amazing! Boy Who Stops Breathing Every Time He Falls Asleep

“We have been very fortunate with Liam that he has had the life that he’s got. We always wanted him to have as normal a life as we could give him. He’s exceeded all expectations,” Liam’s mother, Kim, said when he turned 11. “He is so full of life, he’s fantastic. He’s constantly smiling and laughing. He’s very affectionate. He has all the normal traits of a lot of kids. Every day of his life is a bonus.”

Now almost 18-years-old, Liam Derbyshire continues to amaze doctors. They only gave him a few weeks to live, after diagnosing him with the condition, at birth, but he has beaten the odds, even beating cancer at one point in his life

“The really unusual thing about Liam is that he had a cancer growing inside of him and he had a problem with his bowel,” said Dr. Gary Connett. “I couldn’t find any reports of children who had all these problems and survived.
It’s quite amazing. I would say he’s unique worldwide.”

“No one knows for sure what his life expectancy is. If we had listened to some of the doctors, he would not be alive now,” Liam’s parents recently told the BBC. “We never really thought he would live for so many years, we are living proof that there is always hope.”

Because of his condition, Liam will never be completely independent, but with the help of his family, he will be as independent as possible under the circumstances.

Grace Mugabe lashes Mnangagwa, describing him as a “nobody”

Woman Gives Birth To Conjoined Twins…what happened to her husband will make you cry.